The BVI remains at the forefront of international corporate structuring for cross-border transactions and investing worldwide. Characteristics such as a familiar legal system based on English common law, internationally compliant regulations and tax neutrality make it an especially attractive jurisdiction for pooling capital globally and investing it in markets where legal barriers or political risks would otherwise deter investment.

Since Asia’s economies started opening up to the world, Asian and Chinese businesses have looked to the BVI as a platform to access international capital.

BVI companies enjoy access to a streamlined process to list in Hong Kong – they do not need to face burdensome restructuring requirements for their businesses or redomicile their place of incorporation.

Additionally, the BVI does not impose a double layer of tax and regulation on a listed BVI company. For example, there is no BVI takeover code or public filing requirement applicable to listed companies, which ensures that the incorporation and ongoing costs of using a BVI company are low, while high standards are maintained as required by the International Organisation of Securities Commissions (IOSCO), of which the BVI is a member.

Lastly, BVI companies are extremely flexible in their structure and handling. The constitution of a BVI-listed company can be easily amended to reflect any required shareholder protection provisions so that they suit the client and target investor base. These include disclosure of director interests, authority for issuance of shares, independent valuation for issuance of shares for non-cash consideration, and retirement of directors by rotation. 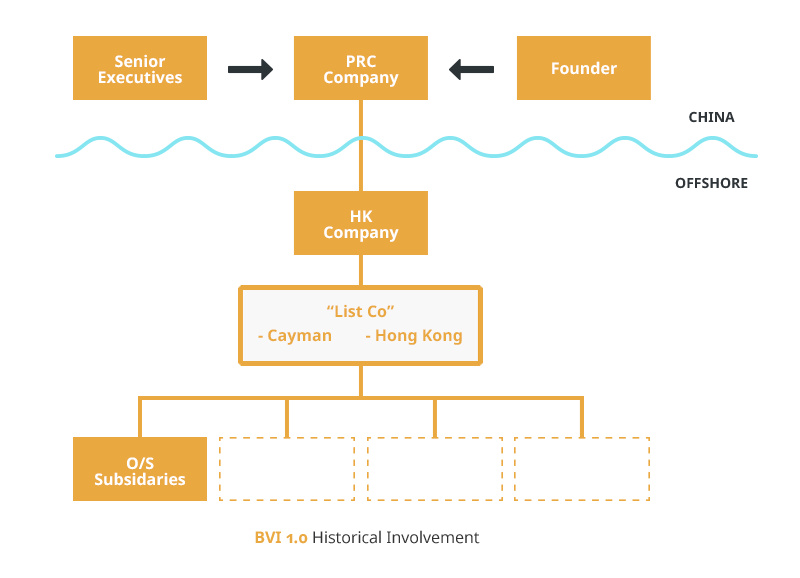 Traditionally, BVI would have played a minority role in this type of case. The Founder would probably have retained his stake in the PRC company on-shore, and similarly, if there was an executive share plan, this would be in the form of directly held shares in the China Company, on-shore, incurring more costs and reducing flexibility.

However, with BVI as an approved listing entity on the Hong Kong Stock Exchange, the BVI has taken a greater role beyond only playing a holding company by providing a much better, more efficient structure for the Founder, the Executives and the Listed company, reducing costs and administrative burden.

BVI Business Companies (BCs) have been synonymous with offshore vehicles for many Asian and Chinese investors since the 1980s. The volume of new incorporations of BCs from the Asia Pacific region has underpinned the growth of the BVI as a corporate domicile. This increase in incorporations is exemplified by the profile of existing BVI companies represented on stock exchanges around the world, providing those companies with critical access to capital required to fund acquisitions.

Because BCs operate efficiently and with a high level of corporate flexibility, BCs are frequently used to structure transactions. For example, a BVI company can merge with one or more BVI or foreign companies, and the surviving company of the merger can be the company incorporated in a foreign jurisdiction. This provides great flexibility for structuring mergers and acquisitions (M&As) and cross-border deals.

The BRICS economies of Brazil, Russia, India, China and South Africa continue to strongly support BVI M&A activity. In China, the substantial balance sheets of Chinese state-owned banks, such as China Development Bank and Bank of China, have been driving M&A activity in China, and Chinese lenders are expected to continue to play a key role in driving M&A financing activity in Asia.

The flexible merger scheme in the BVI has been successfully utilised for a number of transactions for companies in the Asia Pacific region.