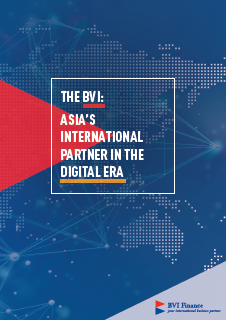 Going for Global Growth: Why China Chooses the BVI 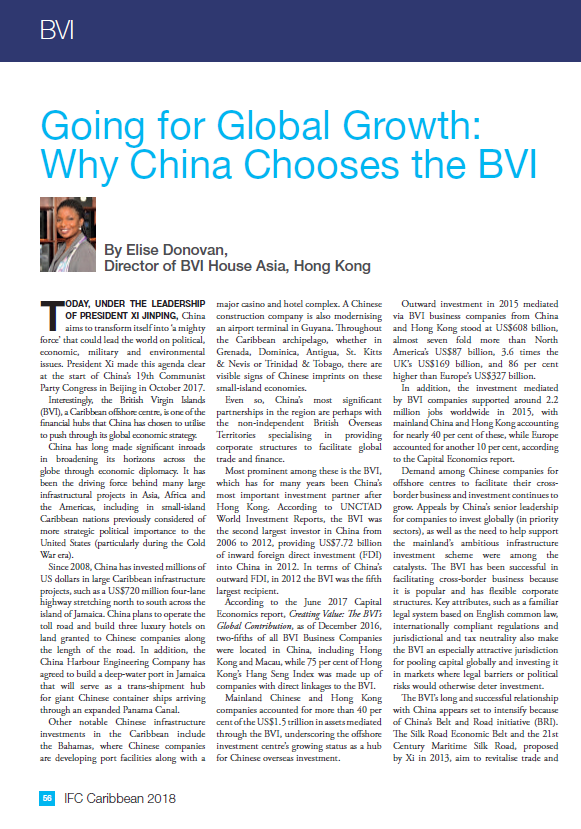 Today, under the leadership of President Xi Jinping, China aims to transform itself into ‘a mighty force’ that could lead the world on political, economic, military and environmental issues. President Xi made this agenda clear at the start of China’s 19th Communist Party Congress in Beijing in October 2017.

Interestingly, the British Virgin Islands (BVI), a Caribbean offshore centre, is one of the financial hubs that China has chosen to utilise to push through its global economic strategy.

From Analog to Digital - 25 Years in Offshore Finance 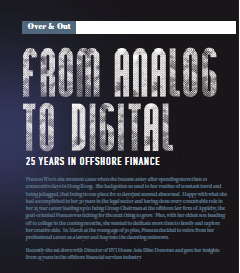 Frances Woo’s aha moment came when she became antsy after spending more than 10 consecutive days in Hong Kong. She had gotten so used to her routine of constant travel and being jetlagged, that being in one place for 10 days just seemed abnormal. Happy with what she had accomplished in her 30 years in the legal sector and having done every conceivable role in her 25 year career leading up to being Group Chairman at the offshore law firm of Appleby, the goal-oriented Frances was itching for the next thing to grow. Plus, with her eldest son heading off to college in the coming months, she wanted to dedicate more time to family and explore her creative side. In March at the young age of 50 plus, Frances decided to retire from her professional career as a lawyer and leap into the daunting unknown.

Recently she sat down with Director of BVI House Asia Elise Donovan and gave her insights from 25 years in the offshore financial services industry. BVI House Asia convened a panel of Team BVI Asia practitioners late spring at its offices in Hong Kong for a roundtable discussion on the regional issues and trends impacting the BVI in 2017 under the theme “Doing Business in Asia.” The panellists discussed trends driving the markets, which jurisdictions hold the most promise, business opportunities afforded by Belt and Road, and forces shaping personal finance in Asia in 2017.

Cover Story: The Caribbean - After the storm 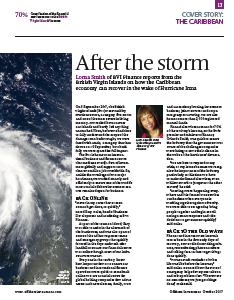 On 5 September 2017, the British Virgin Islands (BVI) was struck by Hurricane Irma, a category five storm and one of the most severe in living memory. It wreaked havoc across our islands and barely left anything untouched. Then, before we had time to fully understand the scope of the damage Irma had wrought, we were faced with Maria, a category four hurricane on 19 September, but thankfully we were spared its full impact.

Hubbis: Uncovering the value proposition of the BVI

The BVI is in a unique position to help investors deal with uncertainty in global markets. In a video interview with Hubbis, Elise Donovan of BVI House Asia explains the role it plays as an international financial centre and explains how it supports businesses, especially those exploring new markets in Asia.

International financial centres such as the BVI help investors find security in the age of uncertainty.

Download Hubbis: Uncovering the value proposition of the BVI
67.371 KB 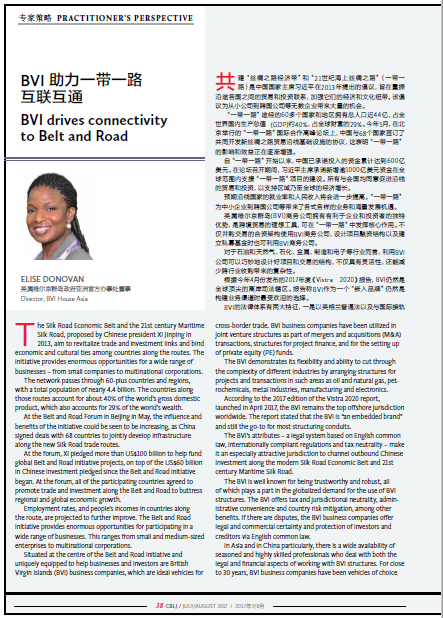 The Silk Road Economic Belt and the 21st century Maritime Silk Road, proposed by Chinese president Xi Jinping in 2013, aim to revitalize trade and investment links and bind economic and cultural ties among countries along the routes. The initiative provides enormous opportunities for a wide range of businesses – from small companies to multinational corporations.

The network passes through 60-plus countries and regions, with a total population of nearly 4.4 billion. The countries along those routes account for about 40% of the world’s gross domestic product, which also accounts for 29% of the world’s wealth. 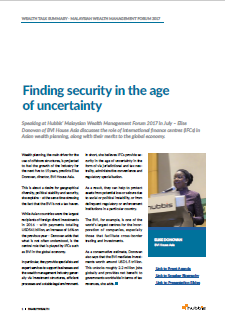 Speaking at Hubbis’ Malaysian Wealth Management Forum 2017 in July – Elise Donovan of BVI House Asia discusses the role of international finance centres (IFCs) in Asian wealth planning, along with their merits to the global economy.

Wealth planning, the main driver for the use of offshore structures, is projected to fuel the growth of the industry for the next five to 15 years, predicts Elise Donovan, director, BVI House Asia. 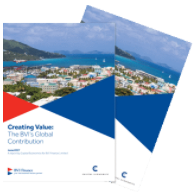 The British Virgin Islands (BVI) enables global investment and trade which supports more than two million jobs worldwide – 150,000 of which are in the UK – according to a detailed report published today.

The report, Creating Value: BVI’s Global Contribution, undertaken by Capital Economics, an independent economics consultancy, analyses the significant global economic contribution of the BVI. It finds that the BVI mediates over US$1.5trn of cross-border investment flows, the equivalent to 2% of global GDP. 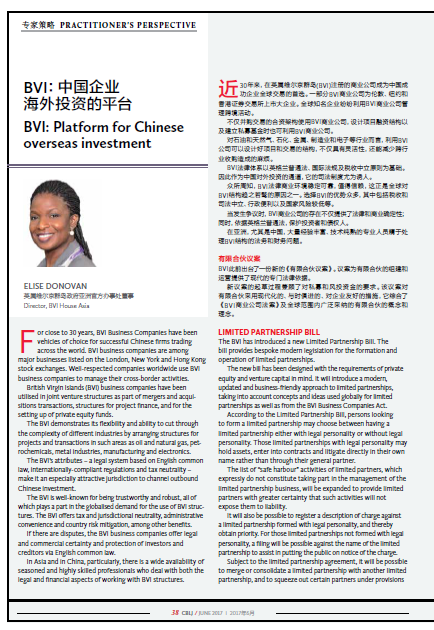 For close to 30 years, BVI Business Companies have been vehicles of choice for successful Chinese firms trading across the world. BVI business companies are among major businesses listed on the London, New York and Hong Kong stock exchanges. Well-respected companies worldwide use BVI business companies to manage their cross-border activities.

British Virgin Islands (BVI) business companies have been utilised in joint venture structures as part of mergers and acquisitions transactions, structures for project finance, and for the setting up of private equity funds. As Hong Kong and London lock horns over which city should be the Belt and Road’s financial hub, Elise Donovan says that the British Virgin Islands (BVI) offers its business companies as cross-border conduits of choice.